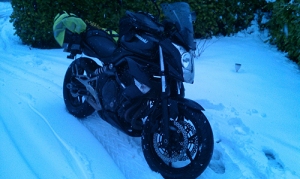 Despite spending the past 14 months as an all-season biker I do have to admit that up until last weekend I had yet to be truly tested in the snow. I had used the flurry before Christmas as a good excuse to work from home for two weeks until the weather improved, reasoning to my boss that I’d be worth more to them alive warm and cosy at home than as a frozen slab of meat by the side of the road. He agreed and bar a brief snowbound trip to the supermarket for supplies the Kawasaki remained tucked away in the garage. I didn’t realise it at the time but I was missing out on a lot of fun.

Fast-forward to last weekend. I had spent the night in London running an event for Home Grown Rock and was due to head back to Nottingham the following morning. When I awoke at about nine-thirty and looked out the window I was greeted with a landscaped covered in a half-inch powdering of snow. My heart stopped, if only for a second as my immediate fear was speedily replaced by intrepid excitement and accompanied by a silly naive grin. I was over a hundred miles from home and was about to embark on an adventure.

My first concern was keeping myself warm and dry luckily I already everything I needed to achieve this in my luggage. A base layer bought for about £20 in Matalan was the foundations of my outfit covering everything bar my hands, head and feet. Warm specialist motorcycle socks from Aldi kept my toes warm and bog standard denim jeans added another layer to my legs. A technical middle layer by Louis Classics helped to keep the warmth in and wind away from my torso and arms in addition to a basic hoody for added warmth. My Alpinestars textile Dry Suit provided armour and additional wind resistance before everything was sealed in with a hi-vis waterproof jacket and trouser combination. The finishing touches were added in the form of waterproof Forma Adventure boots, waterproof Weise touring gloves and an Alpinestars waterproof balaclava before I was ready to squeeze on my skid lid and hit the road. It may sound like a lot of clothing but as the base layers were remarkably thin I still had plenty of movement while remaining warm and without looking like I’d swallowed myself.

My faithful ER6n fired up first time with the familiar beat of it’s parallel twin puncturing the baltic air. Off with the security chain, on with the Oxford Hot Grips and on to the white stuff. The snow was fresh and surprisingly grippy considering but nevertheless I made every effort to keep the motorcycle as upright as possible by leaning my upper body into turns more than I would normally. This tip, picked up from a magazine feature a few months back kept the Kwaka feeling solid even if the surface wasn’t.

Less than two miles down the road the half-inch dusting was now 4-5 inches thick. The roads were now slush as I made progress along the tracks made by other vehicles. I could tell that the surface was slippery but the newly scrubbed in Michelin Pilot Road 3’s I’d had fitted the week earlier fought like a prizefighter for every scrap of grip. To help sail through the thicker stuff I sat back in the seat as far as possible, raising the front and putting pressure on the rear. I figured that if this technique works for riders in the Dakar Rally it should also help me glide through the snow and it seemed to work. Another technique added to my arsenal.

By the time I hit the motorway the gritters had done their business and although there were a few patches of black ice it was mostly pretty grippy. At least that was the case for some thirty miles. Passing Northampton things quickly deteriorated as the my surrounding area began to look like a violently shaken snow globe. The wind had picked up and strong gusts blew the bike in all directions, threatening to push me into a snowdrift that was growing at an alarming rate from the central reservation or into the side of arctic trucks who were overtaking each other taking up two of the two and a half available lanes of motorway.

Snow may look like soft fluffy flakes but I’m glad I was wearing my flip-front helmet in the down position because by the noise they created on impact sounded like they’d stink like Billy-O if they hit your face at 60 mph. The falling snow brought with it another revelation, albeit one that should have been obvious, snow doesn’t bead off your visor at motorway speeds like rain does. I found myself wiping away the white stuff every ten seconds or less which was a little unsettling as grip was rapidly deteriorating. Still I found confidence in my new wheel rubber as the Road 3’s continued to impress.

These conditions continued get worse mile after mile and forced speeds into the sub 50 mph area. After an hour and a half I was expecting to start feeling the cold but my clothing layers held fast. The aftermarket Oxford Hot Grips and Acerbis handguards on the Kwaka have proved a winning combination before and they certainly proved their worth on this ride. As the snow built up on the top of my gloves and across the aftermarket Puig Rafale screen my hands remained warm and toasty.

By the time I exited the motorway at Nottingham the falling snow had stopped but the local roads were still coated and required plenty of concentration to navigate without sliding. Sitting back, upper body shifting the weight, easy on the power and bike remaining as upright as possible I plowed through the slushy roads. On stock Dunlops I don’t think this journey would have been nearly as fun but the Michelins were still finding grip wherever they could increasing confidence in tricky conditions. A few miles on and I was home and safe pondering if I should give the bike a quick hose down to get rid of the salt. It turned out the hose was frozen solid anyway so I put the Kawasaki to bed in the garage and wearing a huge smile headed inside to relive my mini adventure from the comfort of my sofa and warmth of a cuppa.

What my 100 mile snowbound ride has taught me:

Thanks to MTS Tyres in Nottingham for fitting the Michelin Road Pilot 3’s, top service. 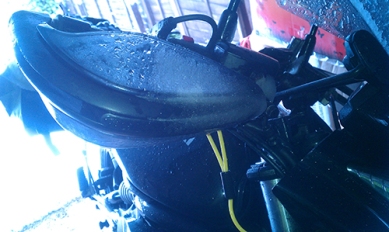 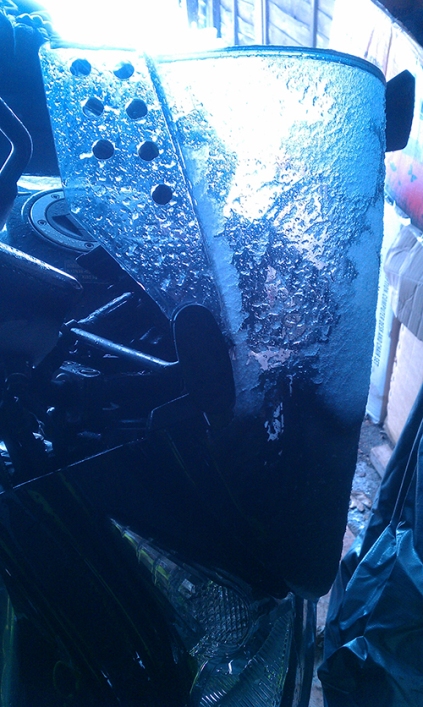