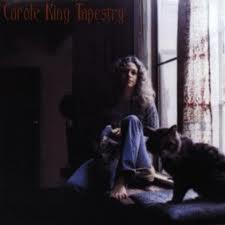 Today (February 9th) marks Carole King’s birthday, she’s the big Seven-O, which is the new sixty, I hear. ‘Tapestry’, her first top 10 album that will be celebrating its own 40th birthday tomorrow (Feb 10th) is considered one of the definitive albums of the early 70s and in 1972 it received four Grammys including Album of the Year.

Although many consider me a dirty Rocker I actually consider myself as having broad musical tastes. Yes more than two thirds of my album collection consists of rock acts but the remaining third is an eclectic bunch ranging from Reggae to Folk and Classical to Calypso. Somewhere in this eclectic third my copy of Tapestry sits proudly. “So Far Away”, the albums second track is a beautiful song that will often get some air play on my stereo when I’m away from home. Sometimes I wonder what a Copper would think if I got pulled on the motorway after doing a ton to find I’ve got Carole King blaring out the speakers.

However, before I get too sentimental by delving into the emotional baggage that surrounds the album let us raise a glass of New World Red and send our regards to the fantastic songwriter that is Carole King. Many happy returns!