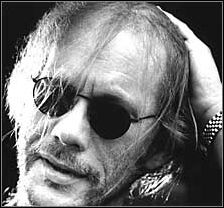 Today (January 24th) is Warren William Zevon’s birthday, he would have been 65 had this ‘Excitable Boy’ not shuffled off this mortal coil aged 56 in 2003.  My first and for years only experience of Warren Zevon was the near-novelty ‘Werewolves of London’ but after a conversation with a rock journalist I started to probe deeper.

The first port of call was obvious; ‘Excitable Boy’ the record that is arguably his definitive album.  Containing songs such as ‘Lawyers, Guns and Money’, ‘Roland the Headless Thompson Gunner’ and of course the ode to those fiendish seekers of beef chow-mein, ‘Werewolves of London’ the album got me hooked, probably because his dark and quirky humour appeals strongly to mine.  But other records such as his debut ‘Warren Zevon’, ‘Bad Luck Streak in Dancing School’ and ‘The Envoy’ took some time to get in to.

Nevertheless I consider Warren Zevon an underrated genius whose name deserves to known by a wider group of folk than is currently the case.  So for this reason, wherever you are today, I would ask that you raise a glass and have a little toast to Warren William Zevon.  “Aaaahooo!”

One thought on “Excitable Boy”