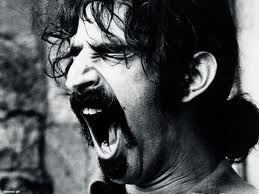 Eighteen years ago today (4th December) Frank Zappa left for his final tour.  He left behind his fantastically named offspring, a wonderfully vast discography and a multifarious ensemble of discerning artists who were influenced by his music.  The metaphorical Prog Rock flag at Dazzle Rebel’s Rock’n’Roll Embassy is flying at half-mast today in honour of such a genius maverick.