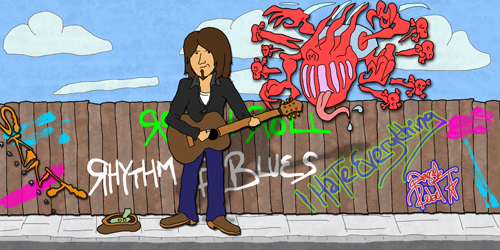 As much as I’d love to tell you good folks that I do nothing but make music, write and doodle unfortunately life is not so kind. I’ve never been in a position to completely pursue a full-on career as a Rock Star, writer or artist. In fact even during the peak of living my Rock’n’Roll dream I still had to fill holes for a living (ahem – I’ll explain this later).

So it comes as no surprise that many of the young guns that actually get to ‘make it’ in the world of music come from families where their parents support them financially in helping make their dreams a reality. Of course this isn’t something that ‘they’ like to publicise too often. In fact I remember a relatively well-known band that was doing the rounds back in 2006/7 while I was touring with Red Star Rebels who made out that they had been dragged up from the streets. In reality they were being propped up by their parent’s money.

Not that there’s anything particularly wrong with this. I suppose it’s a good thing but it doesn’t really scream “Rock’n’Roll” does it? Fair play, we expect that a majority of modern pop stars will have got there because they went to one of these acting/pop/drama schools therefore standing a better chance of gaining the ‘right’ contacts. But when it comes to Rock’n’Roll I want something that’s raw and honest. I don’t want a pampered pop princess in drag moonlighting as a rocker.

The trouble with this outlook is that many of the bands that I like actually came from a privileged background and this didn’t stop them producing raw and exciting music. So maybe this is just my prejudice or excuse why I was not as successful as I could have been? I admit that I was fortunate enough to attend a ‘specialist music college’ aka the Academy of Contemporary Music in Guildford for a year. However this was funded with two years worth of savings, a student loan and lots of hard work and late nights working for a stinking Wetherspoons pub.

I blew my chances of making any waves there mostly because I spent too much time indulging in many of life’s vices. I should probably have studied harder, listened more to my mentors Eric Roche and Pete Friesen and just knuckled down and done some hard graft. I didn’t and left with little more than a bad habit and an empty bank account. It was then that I joined Surefire and got various jobs to support my life as a hardworking musician. But odd jobs were not enough to keep my Rock’n’Roll dream alive so I took a job filling in holes.

Well, ‘filling in holes’ was what the job entailed if you stuck it in a nutshell but there was a little bit more to it than that. I worked for the electricity board and reinstated the holes they’d dug to repair broken cables. This was the job I was doing at the highest point (to date!) of my Rock Star career. It was crazy, at night I’d be living it up on stage and living the dream only to come crashing back down to earth at 5:30 the next morning. Shocking.

I’ve moved on from stuffing holes into a cushy office job with all the boring crap that goes with it. But as an old friend of mine once wrote, “office walls are torture tools” – a sentiment I agree with entirely, I fear my rocket ship stalled before making escape velocity. I have by no means given up hope that one day another ship will come in but I’ve moved on with my life too much to worry about ‘making it big’ anymore. It does make me wonder though, how many bands and artists fall by the wayside that, given the different circumstances, would have gone on to do great things?

Still, there’s no point being too bitter about what could have been is there? After all life might be tough, I might be broke and the chances of making a living doing what I enjoy very slim, but at least I can say I’m giving it a go and doing it my way. And anyway, everybody loves an underdog don’t they? So this is my underdog story and the reason I am calling my debut solo EP “Skint… …and Dangerous”. Yes, I’m broke but I’ve gotta lotta fight left in me yet.

So if you like a genuine underdog story then why not stick around and follow me on my blog, or friend/fan me on one of my social network sites and see if there’s a happy ending to all this toil.

Until next time folks,