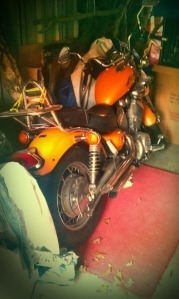 It’s such a tragedy to allow any motorcycle to collect rust sat in a garage because you never find the cash to get it running again. That doesn’t stop thousands of motorbikes succumbing to this very fate and the majority of those will sadly never find their way onto the open road again. I am determined to not let this happen to my little Yamaha Virago. Indeed I have for some time been planning to resurrect the little ‘Viagra’ as a custom ‘Bobber’ project code-named ‘The Goblin’.

I bought the XV535 back in 2009 shortly after being awarded my full bike license (something I should have done many moons ago when I was still a teenager but hey-ho) it cost me a mere £300. Of course for this money it was a proper dog. It had been left outside for two winters and had definitely seen much better days but I brought along a guy from the local motorcycle garage with me to check it out and he seemed to think it was worth the money:
“Yeah it looks pretty past it but these engines are pretty bulletproof. I’m sure if we can get her fired up we’ll be able to get it through the MOT pretty cheaply” said Mr Trustworthy Garage Man.

We managed to get the engine fired up after a short battery charge and decided to take it for a little spin. It was quickly discovered that this plan wouldn’t work as the front brake was so rusted up that it wouldn’t release the wheel. A heavy dose of WD40 and some encouragement from a mallet did nothing to loosen its stubborn clasp but Trustworthy Garage Guy was adamant that it was still a good buy and that he’d be able to turn her into a road-going machine within a couple of days and for a very modest fee.

So after parting with £300 and struggling for nearly an hour to get the machine in the back of Trusty Garage Man’s van I was the proud owner of a 1996 Yamaha Virago XV535. But it’s rarely that simple is it? Trusty Garage Man’s estimate of “a couple of days” turned into a couple of weeks and “a modest fee” turned into over £600. Still at least I now had a roadworthy motorcycle that granted me membership into the two-wheeled community and would one day be the base for my first custom bike. From here it should have been plane sailing but life is seldom that kind.

The little Yamaha ran quite well for a few months and I soon began to realise how underpowered the damn thing was. In town it was brilliant, the low centre of gravity was perfect for someone of my stature and being able to put both feet firmly on the terra firma was a huge bonus. The open road however turned it into a completely different animal as it quivered in the shadow of big Volvos and caravan-towing 4x4s with a reluctance to overtake. This is not what I thought biking was about, yet I was assured that the damn thing didn’t have a restrictor fitted.

Accepting the fact that I had to take things a little slower than most folk on two wheels I began to enjoy riding the little Viagra (an enforced nickname christened by my ZZR1100 owning friend). I had a great summer full of riding and getting my eye in for tight corners around country lanes and even ended up with some scrapes on the foot pegs. The bike ran like clockwork well into the midst of winter when I even ventured out in sleet and hail (but stopped shy of committing suicide in the snow).

Then one gloriously fresh and crispy winter morning when the sun was shining and the frost clearing I ventured into the garage to start up my trusty stead and; nothing. I tried again; nothing. A battery charger confirmed the battery was as flat as Fearne Cotton’s bee stings. I tried to bump-start it but it wasn’t having none of it so resorted to the brand new battery charger/conditioner I’d received as a Christmas gift. With the battery showing in tip top condition I tried again, there was a splutter, a bit of black smoke and backfiring from the exhaust then nothing. Dead as dead thing. I tested the battery again and was shocked to find that it had flat-lined already. I repeated this process three times before giving up.

A quick search on t’internet narrowed the problem down to a faulty rectifier. “No problem” I thought “looks easy enough to fix, I’ll get straight on it this weekend”. Unfortunately my finances at the time were at an all-time low, breadline didn’t even cut it, so “this weekend” turned into “after payday” then “after payday” turned into “once we’ve got the house move out the way” which in turn manifested itself into “oh I’ll get around to it one day”, which brings us right up to date.

So for nearly two years the little Viagra has been buried under old sheets in my garage in a SORN and sorry state. However a rescue-plan is unfolding; first on the list is the purchase of a new rectifier, which will hopefully go some way to ‘rectifiering’ the problem. However in true garage-project fashion this will have to wait until we get the remainder of 2011 out of the way – I haven’t got a free weekend until well into the New Year, so The Goblin project lies dormant but not extinct.

To keep up-to-date with how this project is going either subscribe to my blog or do that RSS thingy, you probably know how to do that better than I do anyway? I’ve not got a deadline for this project so my posts on the matter could be quite sporadic but it would be great if you’d follow me and offer some helpful tips and advice along the way – even if you’re not a mechanic, I can always do with some life coaching on how to finish projects!

Footnote: The Goblin was not originally going to be based on a Yamaha XV535 Virago but a 1984 Honda VT500 Shadow import that I owned for all of three quarters of an hour. Yep that’s correct I owned it for a paltry 45 minutes. I picked it up from this bike trader in the Banbury area, gave it a test ride and thought it was a lovely little bike, then after parting with the £950 ono, I proceeded on my inaugural ride as a motorcycle owner only for it to be cut short ten minutes later as it spluttered to a halt and refused to start again. A phone call to the trader saw the bike picked up with the promise that it would be fixed in a week.
One week later I pick the newly fixed machine up from the designated garage and make it as far as the A5 when once again the bike sputters and stalls at 70mph on a dual carriageway. Now for an inexperienced rider this was scary but I’d been driving a car long enough to know I needed release the clutch to stop the rear end from fishtailing wildly (I was nearly sideways at one point) and coax it across to the hard shoulder. Another phone call (this time a bit more heated) to the trader and a call to the RAC (because the bastard didn’t have his trailer available) and I was no longer the owner of the Shadow. So my experience of motorcycling so far has been a bit of a mixed blessing. Let’s hope those unlucky days are behind me as I carry-on regardless!